Few modern-day toilet facilities exist in homes or neighborhoods in Gondar. According to a survey conducted in 2006 by a U.S. based consulting firm, fewer than 5% of Gondar households have septic tanks and only 52% have access to pit latrines (mostly communal). The waste from the pits is untreated and often disposed of in open areas near homes. About 49% of the residents simply use available open areas. Untreated human waste tends to accumulate in residential areas, presents a threat to human health, contaminates area wells and streams. Showers are also rare in homes. Although residents have learned alternate methods for cleanliness (sponge baths, for example), it is an everyday challenge.

In 2009, CSCA-G successfully secured a grant to construct public toilet/shower facilities. In December 2009, CSCA-G volunteers traveled to Gondar, and, working with the Gondar City Administration, identified possible sites for a number of these facilities. During this visit, representatives of the kebeles (neighborhoods) in which these facilities would be built, endorsed the idea of allowing a kebele council to manage each facility. It was agreed that a written operation and maintenance plan would be prepared concurrent with construction. The plan would outline a schedule for regular cleaning and preventative maintenance.

The design that was developed by engineers in Gondar is shown in the photograph. The plumbing system was designed to carry the wastes to a concrete holding tank. A maintenance plan was written to ensure that each septic tank would be periodically pumped by trucks owned by the municipality, at the municipality’s expense. The final design included eight toilet stalls – five for females and three for males – and a urinal room for males as well as four shower enclosures, two for males and two for females (pictue of view of toilet stall). Six hand washing sinks were also included in the design. The total budget was set at $115,000. 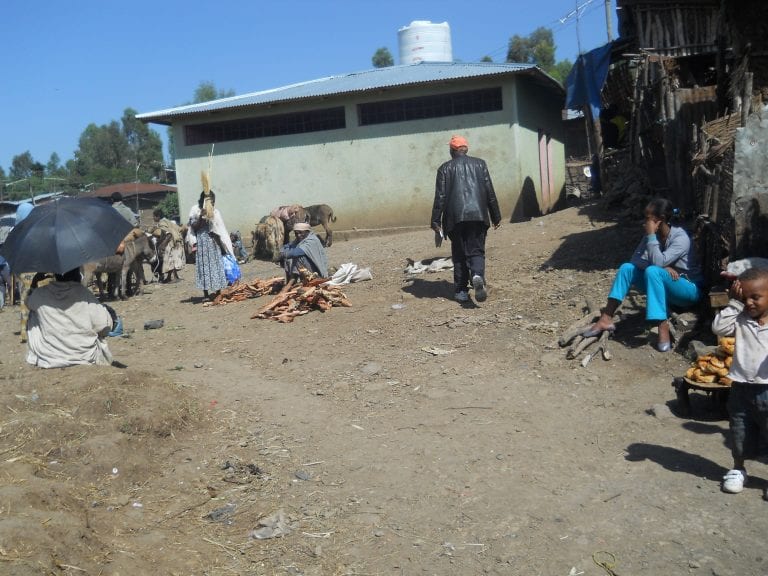 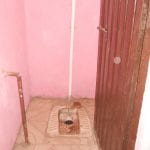 Construction of the facilities began in early 2011. The Teda, Azezo Ayermarefia, and Azezo Demaza facilities were completed and opened in the fall of 2012. However, the periodic low water pressure in this neighborhood initially limited the hours of operation for the Azezo Demaza facility. The Arbegnoch Adebabay facility was also completed in 2012; however, an adjacent road reconstruction project initially prevented easy access.

Plans for the fifth facility, at the Maraki site, changed during the initial construction phase. It was determined that rock formations would dramatically increase the cost of excavation for the septic tank; consequently, the kebele leaders decided to request that the partially built structure be converted into a community health center. This change was approved, a design was developed and the conversion was completed in December, 2012.

Site visits were conducted in November, 2014, and more recently October, 2019, to evaluate the success of the facilities. Two restrooms were found to have significant issues. The Azezo Demaza restroom continues to have problems with low water pressure (or no water at all). The kebele administration proposes that a new water supply line be constructed to resolve the issue. The Azezo Ayermarefia restroom has developed a leak, causing some waste material to surface. In both cases CSCA-Gondar is working with the kebele administrations and the Gondar Mayor’s office to develop plans to address these issues.

The other two restrooms facilities, as well as the health center, are open and well used. 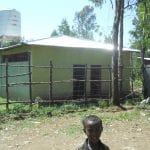